CSIRO is leading collaborative research across Australia to analyse the properties and potential of a variety of biochars to improve soil health and sequester carbon. Two major projects, including one funded by the Grains Research and Development Corporation (GRDC) and another by the Australian Department of Agriculture, Fisheries and Forestry (DAFF), are helping to answer some of the key questions about the potential of biochar

Biochar is the carbon-rich solid product resulting from the heating of biomass in an oxygen-limited environment. Due to its aromatic structure, biochar is chemically and biologically more stable compared with the organic matter from which it is made1. Due to this stability and other specific properties some biochars offer potential value to crop productivity as well as to carbon sequestration efforts. Any improvement to agricultural productivity and/or simultaneous decrease in fertiliser use has the potential to ease pressure on the soil resource, reduce energy consumption and aid in management of excess organic waste.

Biochar has emerged as a potential strategy for climate change mitigation and food production. Incorporating biochar in agriculture is proposed for three reasons2,3: 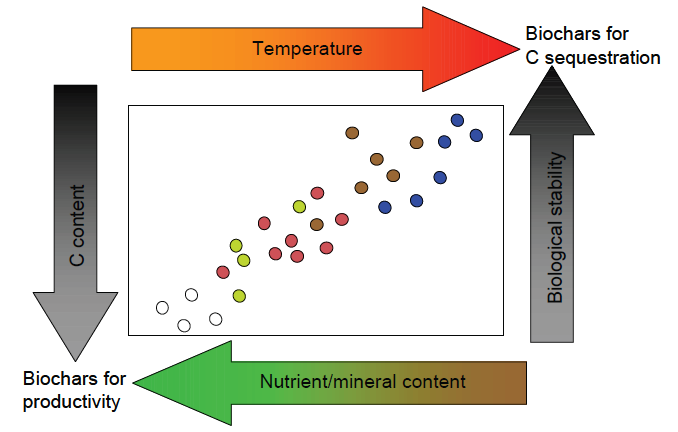 Figure 1: Biochars produced from different feedstocks (coloured circles) and at different temperature vary in their properties.

The GRDC-funded project, jointly led by CSIRO and the University of Western Australia, will help farmers to make informed decisions about biochar use and its potential to improve soil nutrient heath and crop productivity. The specific aim is to optimise fertiliser use through the combination of biochar application and conventional fertilisers. One of the outcomes of the research will be the production of a ‘calculator’ which farmers and consultants can use to assess the effect of biochar on crop productivity.

The DAFF-funded biochar project is a national initiative which, under CSIRO leadership, brings together partner organisation from across Australia. Key research is carried out on the different qualities of biochar and how they interact with the soil mineral matrix and how the properties change over time. The effect of biochar on greenhouse gas mitigation is being assessed in field and laboratory trials and a comprehensive life cycle analysis will provide information on the whole-of-life mitigation potential of biochar application to agriculture.

The two projects share the characterisation and analysis of more than 70 biochars produced from different feedstocks and under different production conditions.

These differences enable specific usages for different biochar types and highlight the need to better understand biochar interactions with the soil mineral matrix. Current funding from DAFF and GRDC provides a firm foundation for biochar research to close some of the current knowledge gaps around use of biochar for agronomic purposes and greenhouse gas mitigation.

Biochar properties as a function of feedstock and production variables

Figure 1 illustrates that the inherent nutrient (or ash) content of the feedstock may be inversely proportional to its stability, yet proportional to its potential to increase crop productivity. The research is assessing the chemical, physical and biological aspects of biochars so as to better understand the properties of biochars derived from particular feedstocks and pyrolysis conditions.

The following analyses have been completed for the project biochars: organic C content, NH4, NO3, mineral N, carbon isotopes (13C), 13C-NMR data, pH, EC, water-holding capacity, CEC and major and minor elements (Al, As, B, Ca, Cd, Co, Cr, Cu, Fe, K, Mg, Mn, Mo, Na, Ni, P, Pb, S and Zn), XRD, SEM and ecotoxicity analyses. Adsorption studies are being carried out to investigate the potential of different biochars to sorb and desorb N, P and S and will be interpreted with reference to the specific surface area and pore volume of the biochars. A variety of biochars are also being analysed for combustion-generated contaminants such as dioxin and PAHs to assess if any potential exists for dispersal of contaminants in the environment. 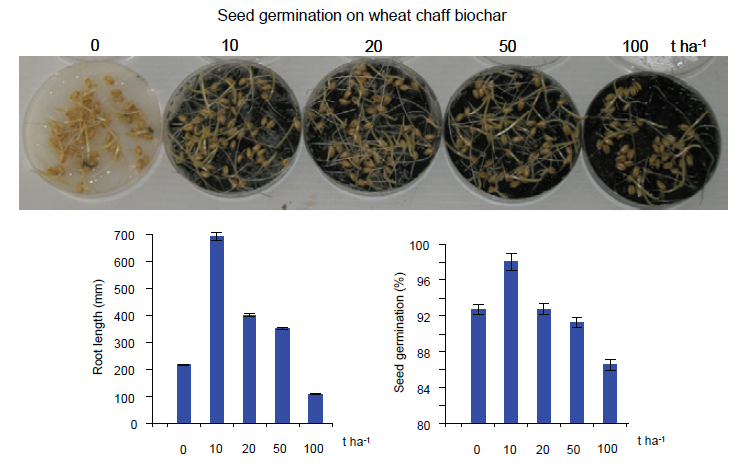 Figure 2: Influence of different biochars and biochar rates on seed germination and seedling growth from a study by Solaiman et al. (UWA).


The chemical and physical analyses of biochar samples from different feedstocks showed that temperature contributed little to the overall variability. However, the type of feedstock, and even variations within one type of material (e.g. oil mallee from different geographic regions) produced significant variations.

Biochars derived from crop residues showed the highest degree of beneficial agronomic properties. (eg. high cation exchange and water holding capacity). Current research is assessing how, and to what extent, these biochar properties are expressed in agricultural soils. 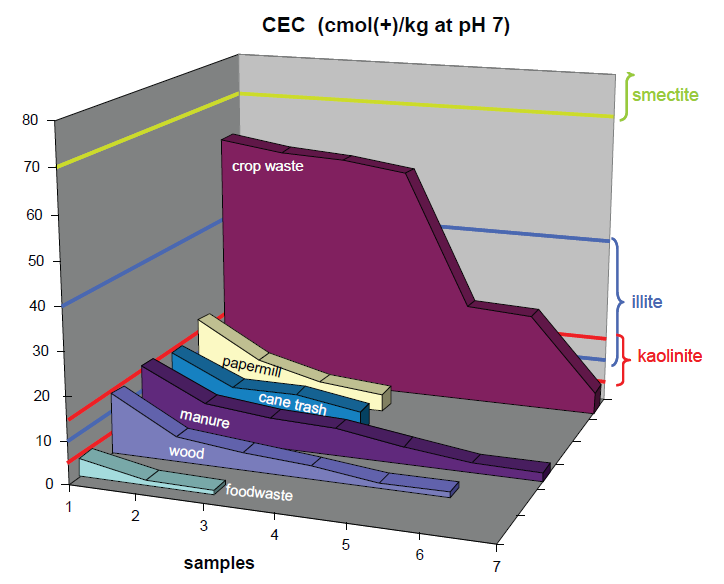 Figure 3: Cation exchange capacity of biochars as a function of feedstock and in comparison with common soil clay minerals; CEC of biochar increases with time by up to orders of magnitude (Krull et al., CSIRO).


Field- and laboratory-trials on biochar application to soil

Field and laboratory studies are being conducted using the same biochars and soils to allow a high degree of comparability. 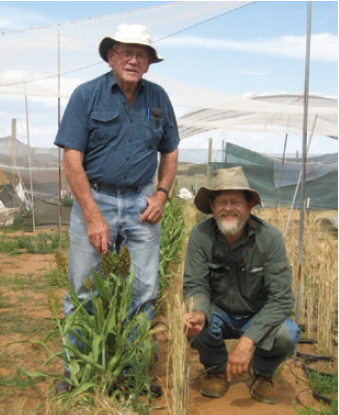 Field experiments are being carried out in WA and SA to evaluate whether there is an increase in fertiliser efficiency when biochar is applied to wheat on poor sandy duplex soil. Further field experiments in WA will assess the effects of biochar on N2O production from irrigated horticulture and as part of a lysimeter study with isotopically labelled N. These studies are complemented by laboratory studies to evaluate the potential of biochar to alter plant N availability in sandy soils via changes in nutrient leaching losses and microbial community.

One research team is working towards an understanding of the impacts of biochar on N cycling, and emissions of the greenhouse gas nitrous oxide (N2O) from soil. N2O is 300 times more potent than CO2 as a greenhouse gas and contributes significantly to total agricultural emissions. 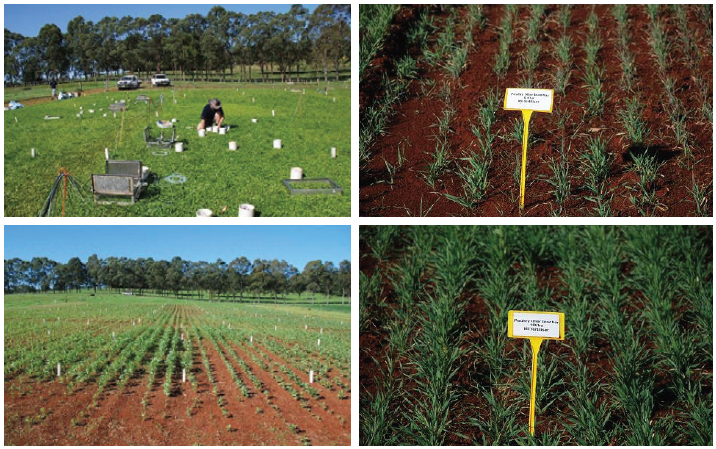 The stability of biochar applied to soil depends on several factors including specific properties of the biochar type, mineralogical composition of soil and other soil properties. The interaction between organic matter and minerals in soil generally increases with the increasing surface area of minerals and the increasing concentration of multivalent cations. It is emitted mainly following N fertiliser application or fertiliser mobilisation following wetting of soil. This project investigates whether biochar can reduce loss of N fertiliser as N2O. Glasshouse and field trials in NSW are designed to assess the potential of biochar to mitigate N2O emissions from soils.

The role of biochar-mineral interactions and the influence of temperature on the stability of biochar in soil remains poorly understood. Two studies will investigate these interactions, using different soils and biochars. One study will determine the interaction between soil type and biochar on crop productivity and will also determine the response curve to low and high biochar loadings. The other study aims to quantify biochar-C stability in soils with contrasting mineralogies. An understanding of this is crucial for quantifying the greenhouse mitigation potential of biochars in different soil types.

This project component assesses the effect of biochar application on the effectiveness of pesticides. Biochars have high binding affinity for some pesticides, which could potentially inactivate them and render them less effective for weed or pest control.

Depending on the temperatures during formation, biochars may have high specific surface area, high microporosity and highly aromatic carbon. All of these properties can influence binding, release, persistence and bioavailability of pesticides. Indeed biochars produced from burning of wheat and rice residues were reported to be up to 2500 times more effective than soil in sorbing diuron herbicide. This project investigates whether small amounts of fresh biochars may inhibit the microbial degradation of organic compounds (herbicides, contaminants) as well reduce their availability to plants and their efficacy and/or toxicity. Reduced efficacy of herbicides may lead to a faster development of weed resistance if not managed carefully.

Studies and field observations have demonstrated that the addition of biochar to soils often results in increased crop productivity. However, an understanding of the processes that cause this beneficial effect in some but not all soils is still largely lacking. This issue is based on the fact that most biochars represent highly stable and recalcitrant forms of carbon due to their high degree of aromaticity. This and the typically very low nutrient content of biochars suggest that the increase in crop productivity may not be caused by a single biochar characteristic but rather due to (bio)chemical reactions in the soil-biochar-microbial interface.

Several research components are working on defining the microbial-biochar-soil processes and interactions. One study is assessing the hypothesis that biochar provides a mechanism and a habitat for microorganisms in soil, especially arbuscular mycorrhizal fungi. High resolution microscopy techniques will be used to investigate the properties of biochar in relation to its suitability as habitat for survival and growth of soil microorganisms. 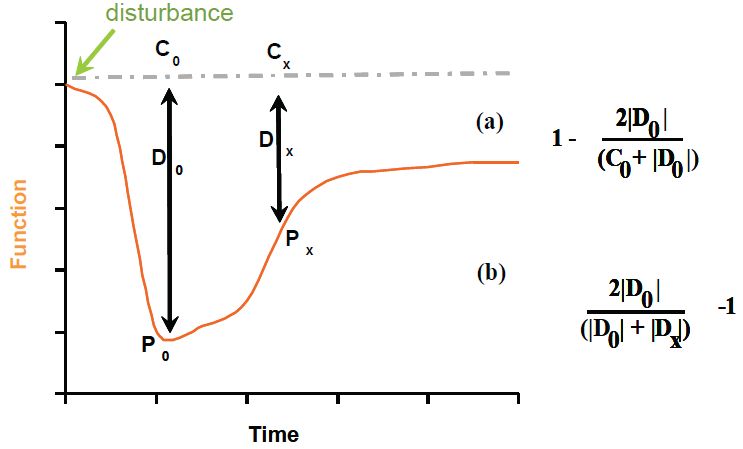 Figure 7: Ecosystem stability can be described as a function of two components: a) the amount of change that disturbance causes (resistance); b) the magnitude and speed of recovery (resilience).


Considering the impact of biochar on the physical and chemical habitat, our team hypothesises that biochar application will provide microhabitats that give protection against environmental stressors (e.g. repeated wet-dry cycles).This work aims to determine the impact of fresh and aged (in soil for 4 years) biochar on the functional stability of the soil microbial community and to identify soil- and biochar- related drivers.

This work will be complemented by compound-specific isotopic analyses to determine whether:


These studies will allow us to quantify:


These results will then also enable us to address the question of a possible priming effect of biochar-derived, bio-available compounds on soil microbial activity and nutrient use efficiency.

Biochar production and utilisation as a soil amendment has potential to contribute to climate change mitigation through several processes:


The research will use life cycle assessment to quantify the mitigation benefit of biochar across the whole life cycle of production and utilisation, for biochars from a range of biomass sources, applied to a range of agricultural crops. 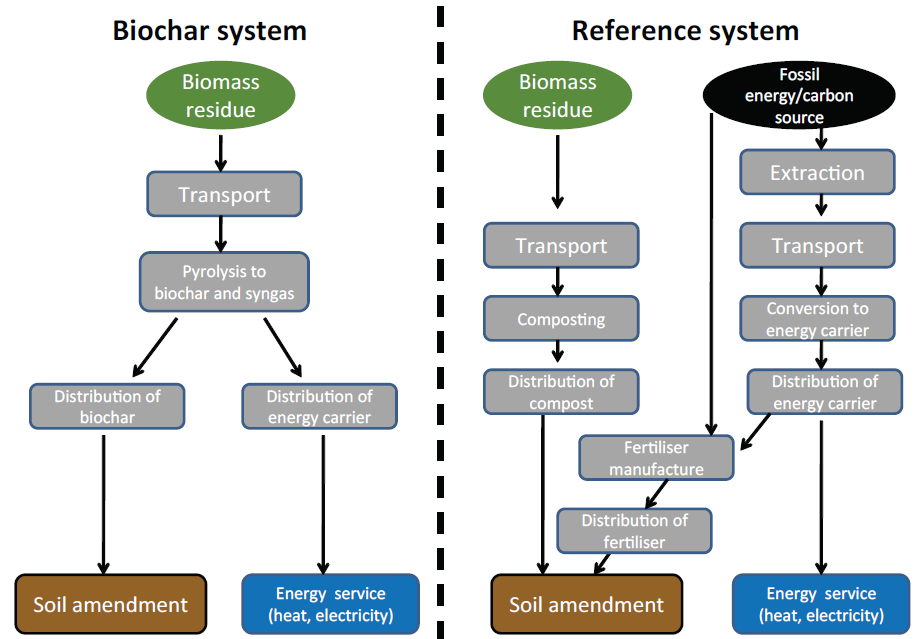 Figure 8: Generic illustration of comparative GHG balance study for bioenergy system. This approach will be adapted for biochar, which in this illustration is a co-product of bioenergy production.


The following researchers are contributing to the GRDC and DAFF biochar projects described in this factsheet:

The University of Western Australia and WA Department of Agriculture

NSW Department of Industry and Investment

The University of Sydney

The University of Adelaide

The University of New South Wales

CSIRO’s biochar research is conducted under the auspices of CSIRO’s Sustainable Agriculture Flagship and is part of a research theme, targeting greenhouse gas abatement and carbon storage in land use systems.

The Sustainable Agriculture Flagship aims to reduce the carbon footprint of Australia’s land use while achieving the productivity gains needed for prosperous agricultural and forest industries and global food security.

The Sustainable Agriculture Flagship draws on the skills of researchers from many different disciplines and collaborates with a range of national and international organisations including from industry, government and research sectors.