Sustainable management of soil, in particular organic carbon, is essential for the continued viability of Australian agriculture. Increasing the organic carbon retained in soil (also known as sequestration) improves soil quality and can also help to reduce atmospheric carbon dioxide. The Soil Carbon Research Program is working to identify land uses and management practices that growers can use to increase soil organic carbon storage and improve production in a changing climate.

The amount of organic carbon that soil can store varies. This is due to:

The Albany sand plain, located in the South-West agricultural production zone of Western Australia, comprises a level to very gently undulating landscape. The soils range from deep sands through to shallow, often gravelly, duplexes (sand over clay) (figure 1). Dominant land uses include continuous cropping, mixed cropping in rotation with annual pasture, permanent annual pasture (with the livestock enterprise being mainly sheep based), permanent perennial pasture and commercial forestry plantations. Closer to the coast, beef production dominates with most producers using a perennial pasture base (kikuyu) to cover the ‘summer to autumn feed gap’. 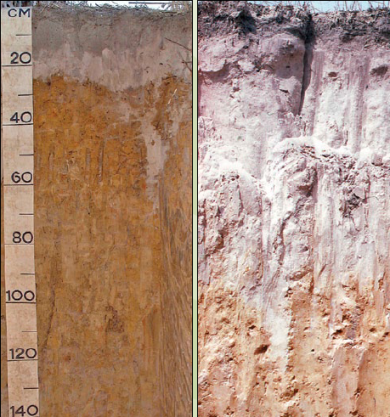 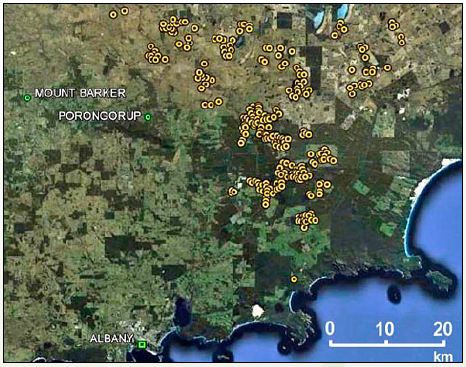 Figure 2: Satellite image of the Albany sand plain showing the soil organic carbon sample sites. The sample area covered two rainfall zones (450–550 mm in the north and 550– 650 mm in the south) and is approximately 50 km from east to west and 45 km from north to south. 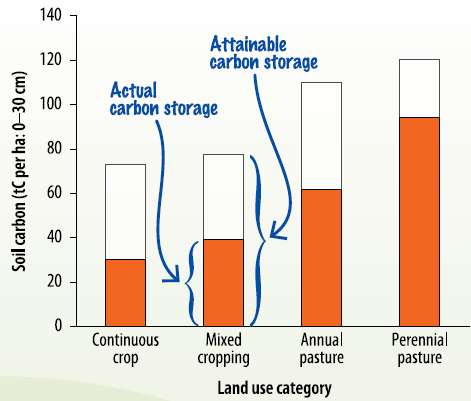 Cropping occurs predominately in the lower rainfall zone (450–550 mm) in the north while the pastures are located closer to the coast in the south where the rainfall is higher (550–650 mm). The average clay content of the deep sands (0–30 cm) was 1.8 %. The attainable organic carbon storage limit was modelled using this clay content and maximal water use efficiency, growing period and plant residue return for each land use.


Achieving the attainable organic carbon storage requires maximum plant growth and maximum returns (plant residues and manures) in any farming system. Therefore, to increase organic carbon storage in soil, it is important that management practices remove any constraints to plant growth, where it is cost effective to do so. For example, claying is commonly practiced on the Albany sand plain to overcome water repellency. The aim is to increase the clay content in the surface soil to at least 5 %—applications of 100–300 t/ha will be needed. Because the clay physically protects organic material from microbial breakdown, claying water repellent sands has the potential to increase organic carbon storage through increased biomass production and increased organic material content. For more information, see the fact sheet Water repellence.


This project is supported by funding from the Australian Government Department of Agriculture, Fisheries and Forestry under its Climate Change Research Program and the Grains Research and Development Corporation (GRDC).