Nematodes are the most abundant multicellular animals on earth. They are small, non-segmented worm-like animals about 0.3–5 mm long, sometimes called eelworms. Most nematode species have a beneficial role in the soil, but a few are pest species that feed on plant roots, and damage roots directly or make them more susceptible to fungal diseases. Beneficial nematodes are important in controlling the pest species and improving the soil health.

As with most soil organisms, nematodes are concentrated in the top few centimetres of the soil (0–20 cm) and in the rhizosphere around plant roots. They live in the thin films of water surrounding soil particles, as they require water to move. More nematodes are found in well-structured soils with large pore spaces, or coarser soils.

Nutrients, including nitrogen and phosphorus, stored in the bodies of bacteria, fungi, and other organisms are released when nematodes eat and digest them. The bacteria and fungi contain more nutrients than the nematodes need so the excess is released into the soil in a form that can be used directly by plants. Some beneficial nematodes physically break down organic matter, which increases its surface area, making it easier for other organisms to break it down further. This promotes the cycling of carbon and nutrients in the soil.

Some predator nematodes attack and kill a range of pests such as borers, grubs, thrips and beetles with negligible effects on other organisms (figure 1). These nematodes use two strategies to find their prey. Some species wait for their prey to move past them in the soil and locate them by direct contact: This is called ‘ambushing’. The ambushers function at the soil surface where they attack highly mobile pests such as cutworms. Others actively search out their prey using a ‘cruising’ strategy. They function at various depths in the soil and prey on slow moving targets such as grubs and weevil larvae. These nematodes are known as ‘entomopathogenic’ nematodes. 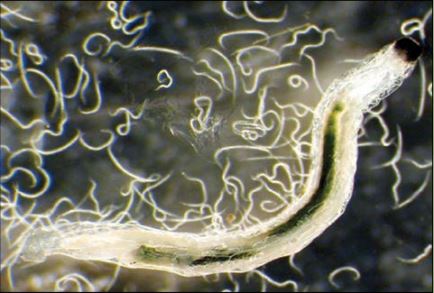 Since effective chemical control of pest nematodes is not practical in most farming situations, managing pest nematodes relies primarily on crop rotations using non-host varieties and resistant cultivars. Some soils are ‘suppressive’ and can prevent the development of pest and disease problems in crops, even when the pathogens and favourable conditions are present. The mechanisms of suppressive soils, and the management techniques that support the process are currently being researched, but common features are high levels of soil carbon, and an active and diverse soil biology. 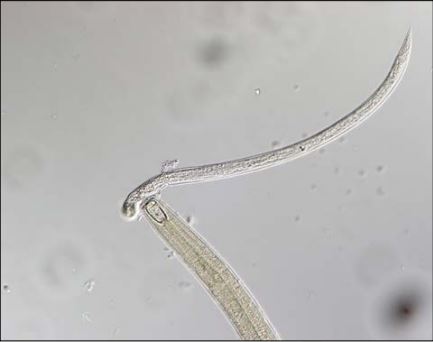 Figure 2: A predatory nematode from the family Mononchidae feeding on another smaller nematode. Photo: Nikki Seymour


Soil high in organic matter also harbours many fungi that parasitise the females and eggs of pest nematodes, while others can trap and consume them (figure 3). 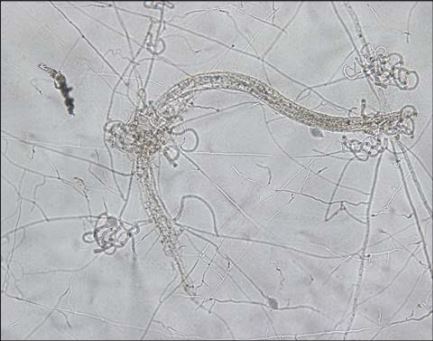 To ensure beneficial nematodes remain abundant in the soil, or to allow damaged populations to recover, they need food (organic matter and other soil organisms), water, and minimal disturbance of the soil. Management options that support beneficial nematodes in soil also support soil biology in general.

Analysis of the diversity and complexity of nematode communities in the soil is a valuable tool, which indicates soil biological fertility, or soil health. The different ratios of bacterial, fungal feeders and other types indicate the type of soil functions that are occurring. Varying ratios can indicate the types of food web (carbon or nitrogen based) and the status of disturbance, maturity, structure or degradation.