Queensland has more than 500 000 hectares of agricultural and pastoral land that has acidified or is at risk of acidification. Soils most at risk are lighter-textured sands and loams with low organic matter levels, and the naturally acidic red clay loam soils commonly found in areas such as the South Burnett and Atherton Tableland. Soils least at risk are the neutral to alkaline clay soils (e.g. brigalow soils and the black clay soils of the Darling Downs and Central Queensland).

Acidic soils cause significant losses in production, and where the choice of crops is restricted to acid tolerant species and varieties, profitable market opportunities may be reduced. In pastures grown on acidic soils, production will be reduced and some legume species may fail to persist. 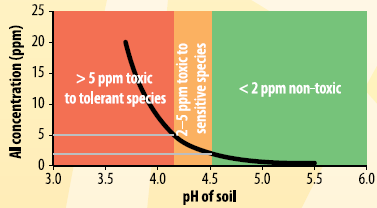 In very acidic soils, all the major plant nutrients (nitrogen, phosphorous, potassium, sulfur, calcium, and also the trace element molybdenum) may be unavailable, or only available in insufficient quantities. Plants can show deficiency symptoms despite adequate fertiliser application.

Low pH in topsoils may affect microbial activity, most notably decreasing legume nodulation. Rhizobia bacteria are greatly reduced in acidic soils. Some pasture legumes may fail to persist due to the inability of reduced Rhizobia populations to successfully nodulate roots and form a functioning symbiosis.

When soil pH drops, aluminium (Al) becomes soluble. When in a soluble form, aluminium retards root growth (figures 1 & 2). Poor crop and pasture growth, yield reduction and smaller grain size occur as a result of inadequate water and nutrition. The effects of aluminium toxicity on crops are usually most noticeable in seasons with a dry finish as plants have restricted access to stored subsoil water for grain filling. 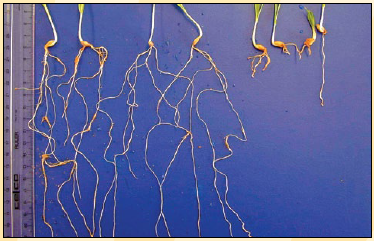 Acidification can occur under natural conditions over thousands of years. However, agriculture can accelerate this naturally occurring process. Practices that accelerate acidification include:

Ideally, soil samples should be taken when soils are dry and have minimal biological activity. Soil samples should also be taken from a number of locations across the paddock, as pH may vary from place to place. Samples should be taken at the surface (0 – 10 cm) and in the subsurface (50 – 60 cm) to detect subsurface acidity, which may underlie topsoils with an optimal pH. Samples need to be properly located (e.g. GPS) to allow monitoring. Sampling should be repeated every 3 – 4 years to detect changes and allow adjustment of management practices.

It is most important that soil acidity be treated early. If acidity spreads to the subsoil, serious yield reduction may occur. Subsoil acidity is difficult and costly to ameliorate. Farming practices recommended to minimise acidification include:

that some leaching loss of applied nitrogen occurs.

When soils are too acidic for a particular crop, lime or dolomite can be used to increase soil pH to the desired level. The amount of lime or dolomite required to correct an acidic pH will depend on the soil and the crop.

Soils with high organic matter and clay content will be more resistant to changes in pH and will require larger application rates. To obtain an estimate of the amount of lime required to correct an existing soil acidity problem, a soil test called ‘Lime Requirement’ or ‘Buffer pH’ should be requested. The test is used to give a lime recommendation to raise the soil pH of the surface 10 cm of one hectare of soil to a target pH that will not limit crop yield. In general, a target pH of 5.5 is suggested.


Table 2: Lime required to counter the acidification inherent in some cropping systems.