What is soil pH?

Hydrogen ion concentration in the soil is called pH and is influenced by chemical reactions between soil components and water. Soil pH is affected by the varied combinations of positively charged ions (sodium, potassium, magnesium, calcium, aluminum, manganese and iron) and negatively charged ions (sulfate, chloride, bicarbonate and carbonate). Soil pH directly affects the concentration of major nutrients and the forms of microelements available for plant uptake and can result in deficiencies or toxicities (see figure 1). 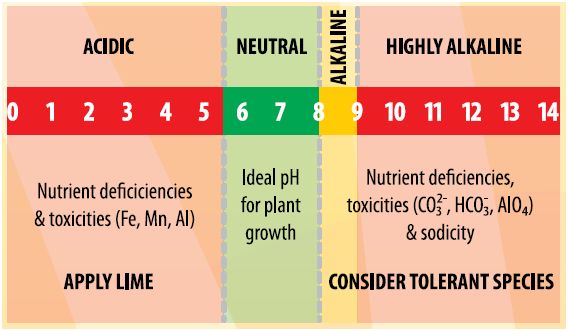 Figure 1: Classification of soils on the basis of pH (1:5 soil:water), the implications for plant growth and some management options.

Soil sampling and measurement of pH helps to determine the practices necessary to manage land with low or high pH. Sampling strategies need to take into account the variation across a paddock and down the soil profile (see Soil sampling for soil quality — South Australia fact sheet).

Soil pH can be measured by a simple device called an ion electrode inserted into a mixture of one part soil to five parts water. Scientists dealing with acid soils with pH less than 5 prefer to measure soil pH using soil in calcium chloride solution. This is not suitable for soils with a pH greater than 5 because some of the ions in these soils (mainly bicarbonate and carbonate) become bound to the calcium and are removed from solution, which then causes an inaccurate pH reading. Soils with pH greater than 5 should be measured in water.


What influences location of acid & alkaline soils in South Australia?

Acid soils, red and pink areas on the map (figure 2), occur in areas of South Australia with high rainfall where basic ions (sodium, potassium, magnesium and calcium) have been removed by leaching. Nitrate leaching also contributes to significant soil acidification under high rainfall. Very frequent legume cropping can reduce pH in non-calcareous soils. Soils high in sulphur may become very acidic due to the dominance of certain chemical (oxidation-reduction) reactions.

Alkaline soils, blue areas on the map (figure 2), are found in arid/semi-arid regions because little leaching and high evaporation causes ions to concentrate in the soil. 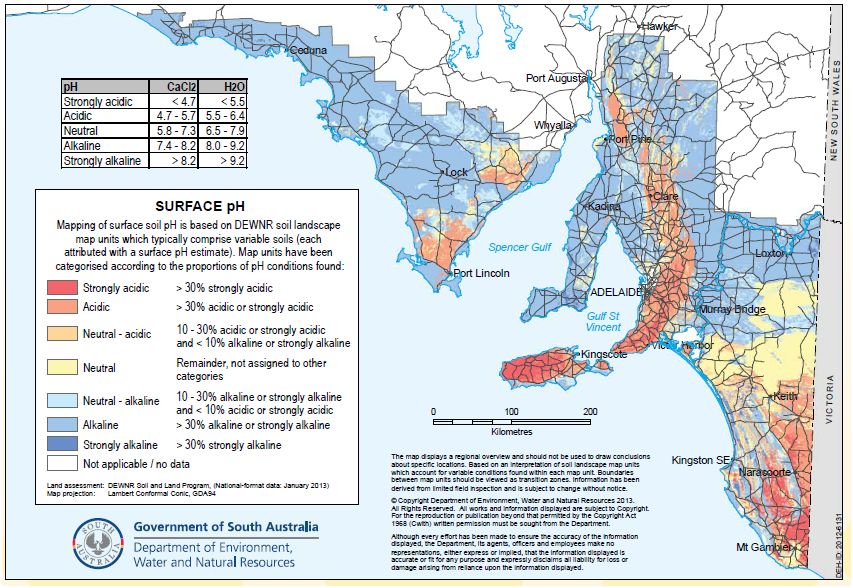 Calcareous soils contain from 1 to 90 % lime material as calcium carbonates and these sparingly soluble salts cause the soil to have a pH of 8.0–8.2 which is not a severe problem for plant growth or agricultural production.

Problems are encountered in alkaline soils when sodium occurs or accumulates and forms salts such as sodium bicarbonate and sodium carbonate. These are highly soluble and increase the soil pH above 8.

When the pH is more than 9, the soils are considered highly alkaline and often have toxic amounts of bicarbonate, carbonate, aluminium and iron. Nutrient deficiency is also likely to be a major problem and the high amount of exchangeable sodium in these soils reduces soil physical fertility.

Acid soils can be economically managed by the addition of agricultural lime, usually crushed limestone. Sufficient lime should be added to raise the pH to above 5.5. The amount of lime required to ameliorate acid soils will vary, mainly depending on the quality of the lime, soil type and how acidic the soil has become.

Soils prone to becoming acidic will need liming every few years. Seek advice on an appropriate liming regime from your local agricultural advisor.

Treating alkaline soils by the addition of acidifying agents is not generally a feasible option due to the large buffering capacity of soils and uneconomic amounts of acidifying agent (e.g. sulfuric acid, elemental sulfur or pyrites) required.

Gypsum will reduce sodicity and this can reduce alkaline pH to some extent. Growing legumes in crop rotation may help in sustaining any pH reduction.

In high pH soils, using alkalinity tolerant species/varieties of crops and pasture can reduce the impact of high pH.