The term organic is used to describe materials relating to or derived from living organisms. Management practices and plant inputs influence both the quantity and quality of soil organic matter, which directly impacts on soil productivity, soil resilience and soil sustainability. Soil organic matter plays a key role in nutrient cycling and can help improve soil structure.

Carbon makes up approximately 50% and nitrogen 0.5-10% (dependent on residue type) of the molecules in organic matter; some of which turns over rapidly (labile fraction) and is available to plants, whilst other more recalcitrant forms (passive, slow turnover fractions) contribute to the stable organic pools. Soil micro-organisms breakdown (i.e. decompose, mineralise) organic matter to obtain carbon, nitrogen and other nutrients for their own growth and activity. In doing so they release carbon dioxide (CO2) into the atmosphere.


The role of organic carbon

By providing a food source for micro-organisms, organic carbon can help improve soil stability by micro-organisms binding soil particles together into aggregates or ‘peds’. Bacteria excretions, root exudates, fungal hyphae and plant roots can all contribute to better soil structure.

At a steady state level, the rate of addition is equal to the rate of decomposition. Large organic additions can temporarily increase the organic fraction in a soil, but unless additions are maintained, the soil will revert to its steady state equilibrium, which is usually low. 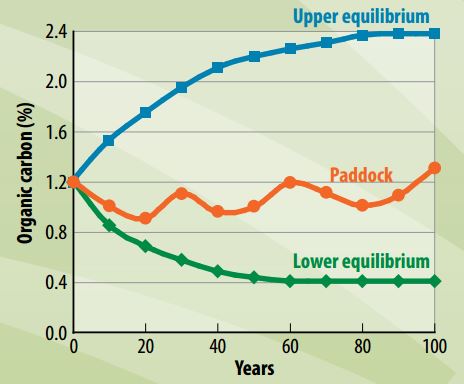 Figure 1: An example of organic carbon levels over time under different management systems.

An understanding of the different components of soil organic matter is required to best use it to improve farming systems.

Total carbon is the sum of three carbon forms: organic, elemental (which is insignificant in most soils) and inorganic (usually carbonates and bicarbonates). Total carbon is different to total organic carbon.

Total organic carbon can be further defined as fractions that vary in size and decomposability. The ‘passive’ fraction is chemically stable and can take more than 2500 years to turnover. Consequently, it is the largest pool and the least likely to be influenced by changes in management practice.

The ‘stable’ fraction, with a turnover rate of 20-40 years, consists primarily of organic compounds that are either resistant to decomposition or physically protected. Soil manipulations that disrupt soil aggregates (e.g. tillage) can influence the turnover of this pool, by exposing previously protected organic material to microbial decomposition.

The ‘active’ or ‘labile’ fraction consists of smaller pools that can be readily utilised by micro-organisms. This fraction originates from new residues and living organisms (including micro-organisms) and turnover generally occurs within 2-3 years. The microbial component of this fraction represents only 1-5% of total soil organic matter. However, since this soil fraction is more sensitive to changes in management practices, significant differences can generally be measured earlier than in the larger, more stable pools. The capacity of a soil to supply nutrients is often defined by the proportion of total organic carbon that is labile.


Organic carbon in your paddock

Soil organic carbon is usually reported as a percentage of your topsoil (0-10 cm). This value can be converted to a meaningful volume for a paddock. For example: